Writing for yourself in the new year 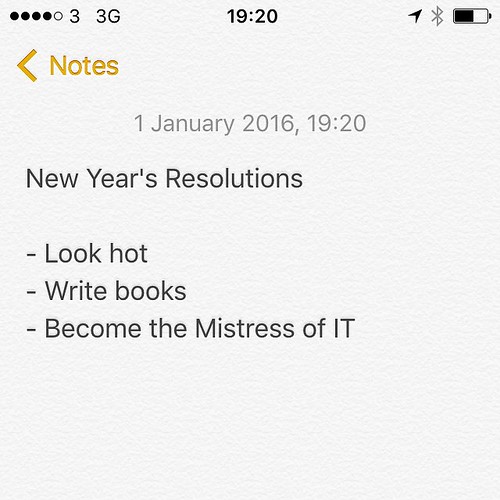 It’s now January and 2016. It’s raining outside as it has been for the entire Christmas holiday. Unfortunately, I didn’t make the holiday as good as it should have been. I was wishy washy, insecure, and feeling downright sorry for myself.

Our holiday started on 19th of December. I was supposed to work that Saturday, but since my schedule changed for my new IT job, I was free. We took a trip to Edinburgh that Sunday, and that didn’t start out very well either. We missed a bus that didn’t turn up in the morning, and by the time we got to the station we had only 15 minutes left to get out tickets from the kiosk and board.

But we couldn’t get the tickets. I had forgotten that back in October when we booked the holiday, we had the tickets sent to the house. Where they are now – who knows? That’s just an example of how jumbled your brain can get when you work full time and have a zillion other things on your mind from the minute you wake up until an hour (at least) when you get home.

Steve eventually bought a fresh set of tickets for us, 1st class as well, and we travelled in style up to our own city of lights. Sunday was super packed and raining, as expected, and I was just a grouch. I’m finding it harder and harder to settle down after working. It’s not like the job is fast-paced or stressful, I think it’s just that I have to be go-go-go all the time that when I sit down at home, I’m like, “I’m so bored!”

During this trip I also decided that I need to desperately lose more weight because my feet have been killing me lately. I’m sure this was all part of my fussiness too. The doctors had said I have plantar fasciitis, but the tops of my feet started hurting too. My chiropractor said it was a tendon that was inflamed, but whatever it is, it’s driving me batty. But, I digress …

We FaceTimed my parents at the market, just so they could see all the fun we’re having here and try to lure them over for a visit. A vain attempt, but it is fun to share the experience with them in Florida. 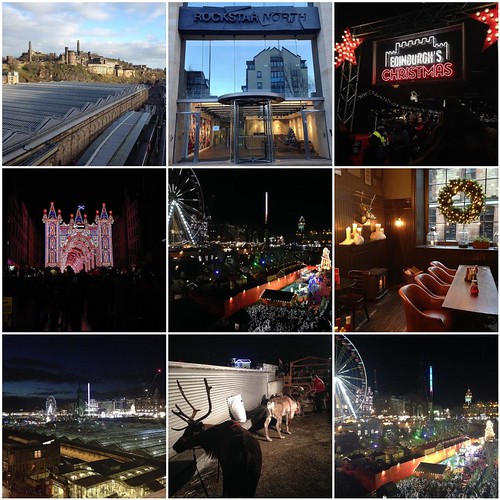 We came back on Tuesday, and on Wednesday I had my first official work Christmas party in England. (It was at lunch time and I was the only one drinking, but hey, that’s how it goes.) Afterwards my friend from my old library and I drank mimosas and wine at Jamie Oliver’s in town and had a gift exchange/catch up. That made me feel 100% more festive.

Back home, Steve and I hung out, we had a lovely Christmas, and I was spoiled rotten with gifts. (Steve outdid himself this year, and I was really surprised by my new iPad Air that he’d sneakily hidden A Christmas Story style by the television. Bless him.)

I went back to work on the 29th for a one off day. It was fun too because we sat and caught up, waited for the phone to ring, and left promptly at 5PM to start the rest of the five day break.

I did get some cabin fever, and grew totally listless with the same old same old attempts at distraction and killing time. I’ve played Sims 4, Fallout 4, LEGO Dimensions, Disney Infinity 3.0 (the Star Wars packs!) and watched all of Making a Murderer on Netflix.

After a trip to the Metrocentre yesterday, wading through traffic, and trying to hobble through the mall with my dodgy foot (it was the left one, now it’s the right one – I can’t win!) I was a complete grouchy pants. Finally, I decided it was time for me to just stop being miserable and get on with things.

So, with all that said, my topic was of writing for myself. I think too often when we’re sitting around trying to do good on our promises to ourselves, we get too insecure or too down on ourselves when we see that other people are publishing their books at a much higher rate than we are.

Someone on Twitter had said a while ago that if we’re sitting around trying to write for fame and fortune, we should re-evaluate. True, the notoriety isn’t the best angle to view your work from, but with this audience that we can see the outline of in social media, I think it’s hard to not take them into consideration.

“What would people like to read? Would they enjoy this story, or this other one better? Will they think it’s too much like this book or that book?” Etc.

It made me think about Stephen King’s quote again, about writing with the door closed. I think with all the Wattpad, Twitter, #pitchmad, and blog posts about writing that we have in abundance, it’s hard to forget that we’re doing this just for us as a #1 priority.

With that in mind, I’ve sort of reasoned with myself that posting stories on Wattpad, or talking about projects probably isn’t the best way for me to work. I even debated mentioning this in a blog post because, yet again, I’m blathering on to the potential audience. I’m really too private to be doing that.

I’ve made my peace with Twitter and jump in and out without making much of a ripple in the account. I’m going to look at all of it as a means of inspiration rather than comparison. If someone at age 20 has 200 books already published by Disney Hyperion then, bravo. However, they are not me. I am not them. End of discussion.

I’ve also thought about how to keep myself in check throughout the year and how posting word counts or updates lets someone else in to the writing process.

Granted, I think all of this sharing with the world is second nature to most of us anymore, but maybe this year, as I learn to become the Mistress of IT, ironically, that I switch off the connection between the world and my little hidey hole of creating my own reality.

Married to Steve. Mother of Jack. Librarian IT Assistant. Writer, teacher, blogger, podcaster, technological princess.
View all posts by Suzanne Schultz Pick →
This entry was posted in All About Me, Technology, Travel, Writing and tagged All About Me, technology, travel, writing. Bookmark the permalink.

1 Response to Writing for yourself in the new year