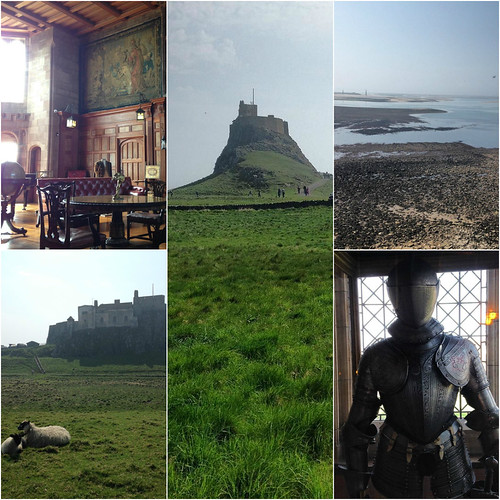 It’s been since January when I last posted something, so it’s high time I take a moment from my only day off this week to update things.

As you can see from the collage above, Steve and I have been travelling. These pictures were taken during our last weekend getaway to Seahouses and stayed in a lovely little B&B alongside the coast. We drank at the pub, we ate fish and chips, and relaxed with the windows open while the salty sea air lulled me to sleep. (Things I do miss from Florida.)

The next day, we saw castles. Steve’s idea was to go to Holy Island which I had heard of, but didn’t realize that one has to drive on the bottom of the ocean in low tide to get there. I swear, I had never been so scared about driving in my life. It was early morning, super foggy so you had no idea where you were going, with all these oh-so-handy warning signs about “use your own best judgement” or “do not cross if this road is wet.”

Okay, first of all, we don’t drive on tiny little road in the middle of the sea where I come from. In Florida, if there’s an island you either drive across a bridge or you take a boat. Simple. What I didn’t get was why we can be so hung up on health and safety (you can’t even go into an elevator without a little robot lady announcing, “doors closing” just so you don’t get confused or stick your hands in the door jam) but something as dangerous as possibily getting your car stuck in cold water and being swept away with the tide, is no big thing. “Don’t be an idiot and drive your car out when it’s dangerous.” Well, why don’t you make it so that it’s not dangerous, huh? Why don’t you have barricades or someone patroling the one mile stip of land into nowhere? How about that, Healthy and Safety Minister?

Anyway, after I screamed bloody murder and drove through the abyss (still amazed I did that) we arrive to an island where people lived their day to day lives on perpetual holiday, never caring about rising tides or the people who may get washed away with it. On Holy Island we saw Lindisfarne Castle and the Priory. (We didn’t go into the priory because, let’s face it, time was a ticking and I wanted to make darn sure I was away from some angry sea that would swallow my little Toyota for lunch.)

After the nightmare of Holy Island, we drove to the castle I originally wanted to go to Seahouses for – Bamburgh Castle. That’s the one that’s been used in films. It was huge and very impressive and after having the best brie and ham toastie in my life (the caramel and sea salt fudge was amazing as well), we walked around the beach. The dunes there are nothing that Florida is used to either – you have to treck across mountains of sand just to get to the coastline. But it was worth it. We had ice cream, FaceTimed my folks, and all in all enjoyed our adventure.

Our reason for going out and about so much on weekends is that I’ve honeslty been quite down. Work is all I know and all I do. Granted it’s good, fun, enjoyable work that I look forward to, but it takes a lot out of you to travel to all the libraries and be in charge of teaching customers and staff how to do computery things. When I get home, I just get depressed and bored really easily. I don’t know if it’s because I have a hard time winding down and when I do, I just emotionally crash, or what. But at any rate, being out and about and spending time with Steve makes me do something other than stew in the house, waiting for the next day to come when I’m running off to some library again.

This means that writing hasn’t been progressing much either. I can write scenes here and there on my phone, but nothing structured or productive really gets done. That takes a lot of time, organizaton and planning – none of which I have much of.

I have, however, started reading on the bus again (because my life consists of commuting and computer updating) so that was a relief that I could get back to my roots, as it were, by taking 15-20 minutes at a time to get back into the habit.

Yesterday I also decided to take a look at my poor blog that has been neglected for so long. Low and behold, the urge to update came over me and here I am. I’m also going to have to update and dress up bookblogarama soon. It’s been too long since I promoted books or did a review, so that will be next on my agenda (after everything else, of course.)

Anyway, the Great British Summer is upon us, sort of. I have my bathrobe on with the heater running downstairs. Both Steve and I had a cold a few weeks ago (he stayed home sick, but I kept on truckin’ despite my urge to crawl up in a batcave and sleep for days). We’ve also been entertaining the idea of buying a house somewhere. The issue is that my work is way out on the coast and Steve’s work is way out in the country. Town may be our only mid-point solution.

And books-wise: I’ve finished the Half Bad series (amazing) and have now gone back to Ready Player One. This will be a test to see if I finish this book finally before I write another post.

2 Responses to Back from Seahouses