Seahman and the Great Exhibition of the North 2018 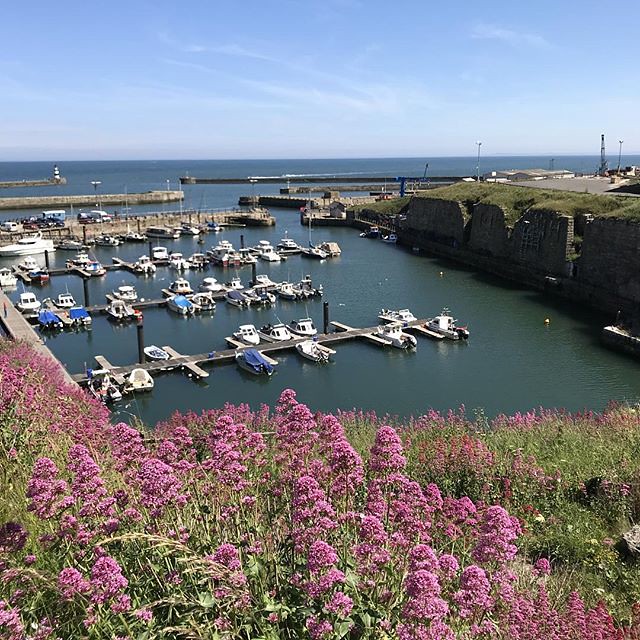 Getting back to things we’ve done lately and failing to keep up — we travelled to Seaham, Durham about a month ago. Actually, Daisy had been here before we ever were because she attends doggy day care and they sometimes take her on little adventures when it’s warm out.

That dog has an awesome life.

At Seaham, there is a nice little town to walk around, plus big named shops like Asda and a Costa. We went to the marina (picture above) and went on a rocky section of beach before finding a nice, soft sand beach. Daisy was overjoyed because there were lots of little kids for her to try and play with, so we had to try and entertain her otherwise. Plenty of places to get an ice cream and plenty of places to relax on a warm, sunny day.

Aside from the beach trip, we went to the Hancock museum a couple of times for the Great Exhibition of the North event that they have on all through summer. We didn’t see the fireworks at the Quayside or anything on the first opening day, but what we did see was quite cool.

First the museum has all sorts of new exhibits, one of which was the first edition of a book that I read as a student at University of Central Florida way before I ever imagined being a British citizen. The Blazing World is one of the first sci-fi books and it was written by a woman so, take that old, dead white guys!

The other night, we went to a talk that Steve’s old company did about their work on the Marvel movies. I was a proud gal that night when I saw so many kids and students asking the guys their advice on how to get into concept art.

Then in town we came across an art project where people could rename streets on the map of Gateshead and Newcastle. Of course, I named on street after my parents, and Steve named one of the streets after the allotment that we finally got.

Now, as of today, I have not been as active in the allotment as I was when we first got it. It’s an absolute mess, which I’ve been told by a few people, is totally normal. We’ve spent a good month or so, pulling up weeds. Some of it is mare’s tail which our allotment manager told us is a right pain to get rid of. Still, we have some vegetable plants from the library (they do all sorts at my work!) so we’ll have some summer vegetation around the weeds. Yuck.

Also, we saw Elvis Costello at Newcastle City Hall on the 25th of June. That was very cool and since Steve loves his music so much, I was glad to give him the tickets as a late birthday present. Elvis had to cut his tour short due to health reasons and we wish him the very best of health. The librarians I work with are eager to go along next time to see him again in Newcastle.

Right now, Steve and Daisy are on a stroll while I have the flat to myself for a bit. Our house purchase is going at a slow pace, but as far as we know now, things are just carrying on as normal. I figure they’ll give us a date to move, and we’ll panic because we’ve been laying low for a while and just waiting for the official green light on everything.

Other than that, I’m trying to use my bullet journal for keeping up with my blog posts and my writing progress, so both of those things are scheduled for today. I have one post down, now I need some work on my book to keep me up to date.