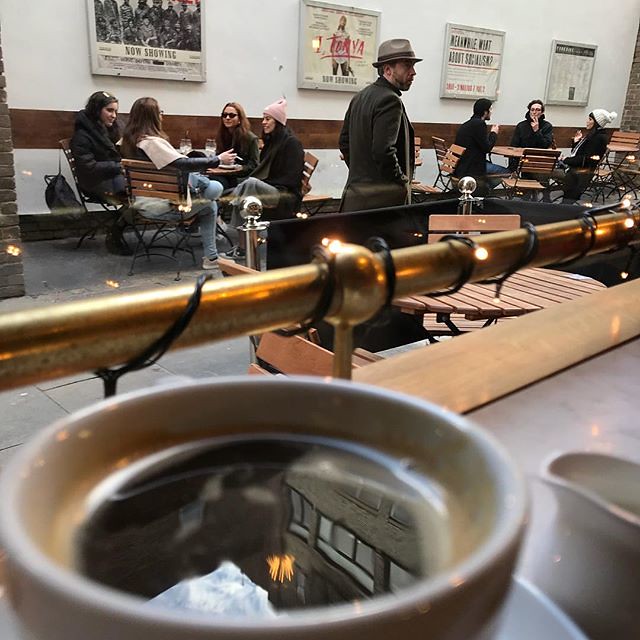 I don’t think anyone loves this photo as much as I do. I thought it was cool that I had all the things hip going on at once — hip people, a guy with a hip hat, and even a coffee, all while at a hip movie theatre.

Unfortunately, though, I’m ill. Like not a normal cold, ill. Been in bed for days, can’t mentally function kind of ill. This is the price we pay to work in customer service, I suppose. All the germs travel to us, then we end up feeling guilty about being off sick and pass it on to all of our co-workers. Last time I was off, however, I had the stomach flu, so having a stuffy cold may be some sort of consolation prize. Not sure.

Aside from that, things at Pick Manor have been iffy. I had the brilliant idea of buying a house a while ago and now that we’re finally in the process, we found that it’s just a huge pain. First of all, you have to sell your property first before anyone will “take you seriously” about purchasing another. This means no matter how much your bank has approved you for in financing or how much you have saved, you can’t make any kind of move unless it’s sold. (Granted, yes, if you want to, you can have two properties and rent one out, but you end up paying a penalty for this and yay taxes!)

We came close to buying a new house near Steve’s work, but that was just too expensive. We would have poured all of that savings he worked so hard for, just to have something that wasn’t in the location we wanted and wasn’t even big enough for a washer and a dryer. (It’s not common to find these things in a British house, but if I’m going to move, I’d like the option, you know?)

So we’re sitting here waiting. Poor Steve has had a hard time of it, because this is just so bloody stressful. When the surveyors came around to check our property in lieu of the new house purchase, an electrician told us that our flat needed a whole rewire because it was dangerous. We’d not done anything to the electrics since Steve moved in here in 2008 so that was freaking frustrating. The electrician told us what a nightmare it would be and how we couldn’t even consider having it done ourselves because the electricians would turn it into a bomb site and it would be unliveable afterwards. He suggested we have the builders handle that, take the cut in the offer the builders gave us for our flat as part-exchange, and get on with it. The builders weren’t having that, so we took Daisy to doggy day-care, and toted Jake to a hotel with us for three days while an electrician did the work. Mind you, this was the third electrician we had come around to do a quote because the first two were like, “What a mess! This is awful! How could you live here with this?! Why did you purchase it?” and on and on.

With the recent Beast from the East snowageddon, I learned that it’s illegal to not clear the snow off the hood and roof of your car. It’s too dangerous. However, a flat that has dodgy electrics that could potential kill everyone in the building — that’s okay? Makes no earthly sense whatsoever.

But no matter. Here I am in England, trying to hang out with a severe cold with my cat on the coffee table, my dog in “her” room which is the computer room that Steve’s in currently working from home. I still have my lovely view from my big picture window in the living room and we still have money in the bank. All in all, it could be worse. It’s just freaking frustrating.

Nonetheless, I will become a royal subject this afternoon and celebrate at a pub in the best British fashion this evening. Cheers!

Married to Steve. Mother of Jack. Librarian IT Assistant. Writer, teacher, blogger, podcaster, technological princess.
View all posts by Suzanne Schultz Pick →
This entry was posted in All About Me, Travel and tagged citizenship, England, house. Bookmark the permalink.