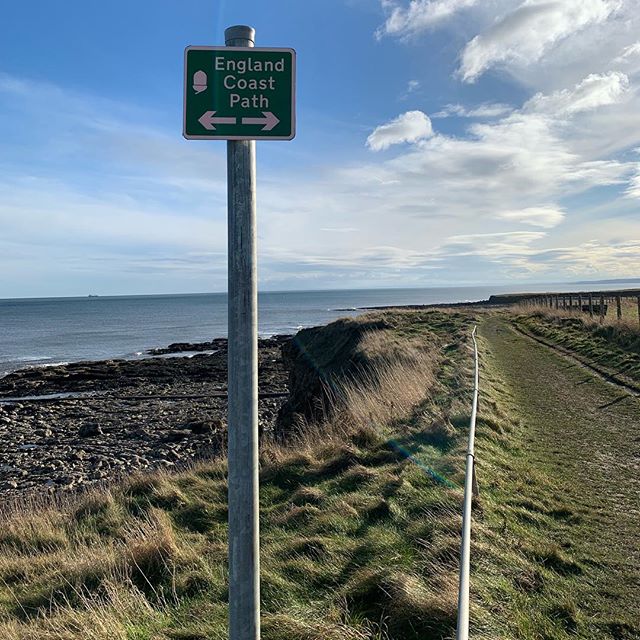 Well, it’s the middle of February so that means I’m still plugging away at my goal-oriented planning.

From the photo above you can see that I have been outside and getting fresh air. Last weekend Mister Pick and I took Daisy to Souter Lighthouse which was interesting even though Daisy acted up and tried to jump on every dog and human that came close to her. (Goldendoodles are insane, I tell you.)

I went in the lighthouse on my own while Steve took her for a walk and the gal at reception told me that it was 75 or so stairs and the last bit was very steep. Now, me being me, I heard that and thought immediately, “Well, I won’t be climbing that then, will I?”

It was freaky though because on the way back down you have to go backward like on a ladder and my life flashed before my eyes a bit because I could see myself falling straight back and them having to find Steve on the beach to tell him that his wife had broken both of her legs in a freak lighthouse incident.

But I didn’t, and I was proud of myself.

Anyway, so I was pleased with myself after that and looked at the little lighthouse cottage before going outside and hanging out with Daisy while Steve took a look inside.

Having a National Trust membership is nice when the weather permits you to explore things nearby.

We also took a walk down the coast, hence where this photo was taken, and enjoyed ourselves thoroughly.

I was off on Wednesday and that was the first time that Daisy went to doggy daycare when I was home so I felt like a free woman who didn’t have to check on the baby every five minutes. I went to the dentist, the gym (hooray!), Weight Watchers (lost 3 pounds — more hooray), and bought myself a bike because I want one. (I totally need a wicker basket for the front of it!)

Valentine’s Day was good. We had M&S Dine in for Two (tradition) and I got my super cool Cath Kidston Bambi bag!

Today we took a walk along the river and I found lots of nice paths where I can ride my new bike, so I’m super excited. This bike is by no means the fancy cool Trek that I have left in Florida, but it’s cute and comfortable from what I could tell from the showroom, so I’m ready to take up casual cycling again.

We also had a chance to look around our new neighborhood and was pleasantly surprised at all that was going on. We even had a couple of people stop to chat with us and we get the idea that we’re notorious (in a good way) because the couple who owned our house before us were well-liked around here, and I’m sure they let everyone know that we’d be turning up with this mad dog.

Now, I’ve focused on my good things because all of this is part of my planning for achievement and working on spending family time as well as my fitness which really, really needs for me to keep myself accountable for each week.

Again, I’m really stoked about my Passion Planner, and my This is My Era planner. I still find it so easy to be lazy and procrastinate but this has helped me put things in perspective, even if it’s small personal objectives. Not that health and creativity are small topics.

Like, one of my objectives is to amp up bookblogarama.com but it’s going to be so much work and it’s so much easier to just not start getting involved. However, I really want to have more book reviews and interact with more book bloggers so I’m going to have to just dig in and get that started.

I’m also listening to podcasts which I never did before but it seems to put me in a better frame of mind for the rest of the day, as opposed to music where my mind can wander.

The writing is okay too. I at least work on something most days, so that’s a huge accomplishment considering how little writing I was doing for the last few years, honestly.

And with that said, here’s hoping everyone had a fab Valentine’s Day and enjoys the rest of their February!