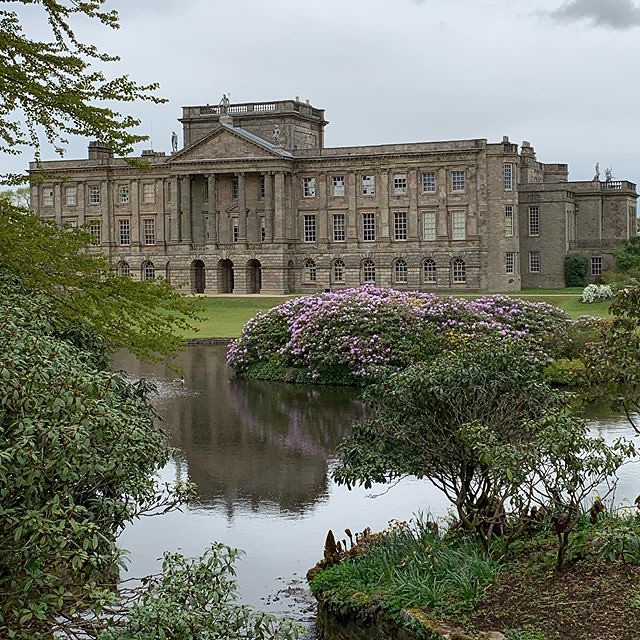 This is, hand’s down, my favourite photograph. I took it last week at Lyme Park, AKA Pemberley. The pond should look familiar to any of you who have swooned when Mr. Darcy emerged from it in the BBC mini series version of Pride and Prejudice.

We spent the last couple of days travelling to The Wirral (or, Liverpool if it’s easier although the Picks aren’t from Liverpool, proper). On our way, we had to leave Daisy at the kennels, which I hated to do because she didn’t know the place or the other dogs. However, it was a chance to have some together time that didn’t include avoiding cafes, museums, or other such establishments because of a giant dog in tow.

On our way from Newcastle, we stopped in Ripon because A. I believe I live at Downtown Abbey and B. There was a cool place to visit through our National Trust membership.

Fountains Abbey was the biggest abbey we had seen that was still intact. As an American, I just cannot get over how old things are and are still sitting about for people to see, touch, experience, etc. There were Water Gardens on the property too, but we only had time for a walk, a quick look at the abbey, lunch, then back on the road. However, this just means that I plan on us going back sometime soon because there was plenty to see there, especially if you have a dog to walk.

We caught up with the Picks later that day, and spent our second day down there travelling to Wales — a place I had never been and a place where Mister Pick went to school and worked for a collective of about 8 years. (Before I graced him with my presence, obviously.) Wales is beautiful and the only equivalent I can give it would be a kind of wandering Virginia countryside drive. It’s very green, the air is fresh, and it was suitably rainy that day. We took our time exploring Chirk Castle which is really impressive. The place has a dungeon, so now I know what that feels like. (Hint: it’s dark and they don’t even have proper windows, so it’s as dyer as you’d imagine.) The other parts of the castle were renovated into a proper estate house, so the rooms were lush and impressive — some of the ceilings had Greek gods and goddesses depicted in the plasterwork. There were portraits of royals and noblemen and women. There was huge fireplaces, and even big, comfy couches that, looked modern in a 1940s, post-war way. I loved the gardens though because you could walk through there and not even realize there was a giant castle behind the trees. It was so relaxing and nice to wander around there, listening to the birds, and looking at all of the flowers and trees that were planted there.

I absolutely loved it.

After our visit with The Picks, we took a little detour to Lyme Park as posted above. Unfortunately, the house was closed the day that we got there and instead of going to the less cool tea rooms. (The brochure showed women in Austen-esque dresses with bonnets, sipping tea. Of course, if that wasn’t an option, I wasn’t as interested.) I did also look through the house’s book sale books, and chose a 1933 edition of Dicken’s Our Mutual Friend.

Upon our return, in order to avoid traffic, we took a long drive through the countryside, which Mister Pick did because I detest driving in unknown places that include roundabouts, mountains, empty fields, steep declines, and anything remotely tricky. However, it was worth it, because we rescued poor Daisy Doodle from her confinement before 6PM. The lad who worked at the kennels was very nice, but he said Daisy was timid with him because she didn’t know any of the staff. Daisy is not timid, so I don’t know if she’ll settle in better on a longer stay. The place is highly recommended and people reuse them often, so it’s not like it’s a bad place to take her — I just hated her being in a cage.

But everyone is back home now and although I worked yesterday, I’m still enjoying the last bits of my holiday today with Mister Pick, Daisy, and the cats who keep staring at me as I type this.

Also, it’s Sunday, which means I’m keeping off social media as best I can. Old habits die hard and I have to stop myself from just picking up my phone and checking Twitter throughout the day. It’s just one of the little things I’m making a habit of just to clear my head, give my eyes a rest, and focus a little more about being at home.

And with that said, I hope everyone has had a nice Easter and a great April, so let’s get on to May 2019.

1 Response to An April visit to Fountains Abbey, Chirk Castle, and Lyme Park