Our trip to Amsterdam 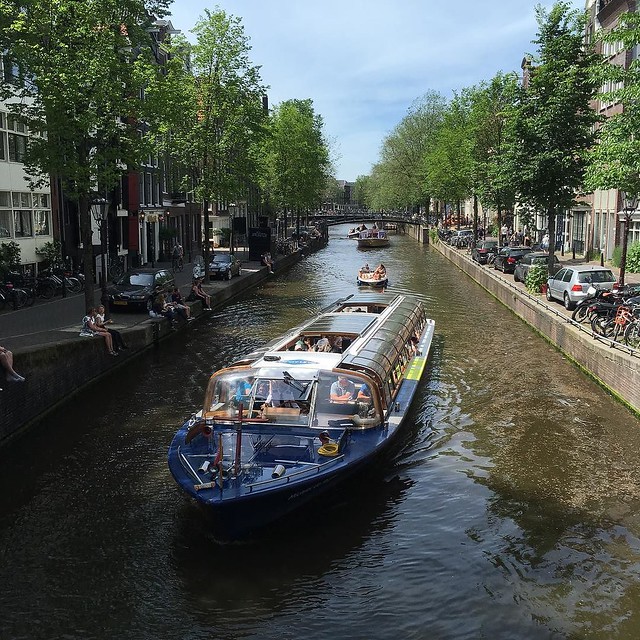 This week I went on my first continental European trip. I’ve lived in England for six years and I’ve never had the holiday time or the money for a city break. This year I made sure that we celebrated Steve’s birthday with something new and fun, and off to Amsterdam we went.

The trip from Newcastle is only about an hour’s flight time, and while we had the option of the ferry from North Shields, the advice by my friends was that we should take a flight so we had more time for museums and sightseeing. Everyone I know here has been to Amsterdam a bunch times, so it being my first journey I was so eager to see everything because the place had been so highly recommended.

We stayed for three nights and the weather was glorious. We stayed in this amazing little apartment all of our own in a busy area of the city. We were around the corner from the Anne Frank House and Westerkerk the church with the bells that Anne Frank found so reassuring.

Going to see the Anne Frank House was surreal. My first aspirations for writing came from my sixth grade teacher reading us The Diary of Anne Frank, so I was ready to spill tears all over the place before I even got into the museum – I was so moved by the whole experience. I soldiered on though, and I enjoyed seeing the museum. A lot of information about the family was stuff I knew from my own curiosity, so I’d seen some of the videos they played (thank you, internet) but it was fascinating and heart-breaking just the same. It’s just something I’ve always wanted to do, and now I’ve done it. I even brought home something I’ve always wanted – a red, checked diary like Anne’s. (I love gift shops.)

We also saw the Van Gogh Museum. Steve and I liked getting up close to the paintings and seeing the intricate detail of the brush strokes. I cannot believe that he did so much in only ten years. I was also very impressed with myself that I had watched enough documentaries on artists to know how to pronounce the other artists names like Toulouse-Lautrec and Gauguin. Also, I decided that I love this painting of his the best. I just love the colors and the brush strokes, especially in his eyes.

We spent a lot of time at the Rijksmuseum and I can tell you that we saw so much culture that we were cultured out. I loved the Rembrandt painting and Napoleon’s pistols. I walked a total of 7 miles that day, and my feet were on fire, so I didn’t get to enjoy it all as much as I wished I could. But we went to every floor and saw as much as we could that afternoon.

It was Day Three of walking, drinking Heineken, eating pancakes, stroopwafles, and burgers. I had seen the Red Light District, a ton of bicycle riders, about as many American tourists (*waves flag*) and taken a canal boat cruise. All in all it was a perfect, lovely mini holiday and we’re eager to go back again. We only scratched the surface on all the things Amsterdam has to offer. We even talked about moving (though we hear it’s super expensive to live there) and I want to learn some Dutch for next time.

Anyway, this review sounds fairly juvenile and basic compared to what we saw and how we felt about the place, but it’ll have to do for now. If you ever have the chance, I highly recommend seeing the place yourself. It’s a beautiful, laid-back city with all sorts of things to see and do. We hated to go back home but, alas, here we are and we’re back to work tomorrow. Oh well, Steve has had a good birthday.

2 Responses to Our trip to Amsterdam