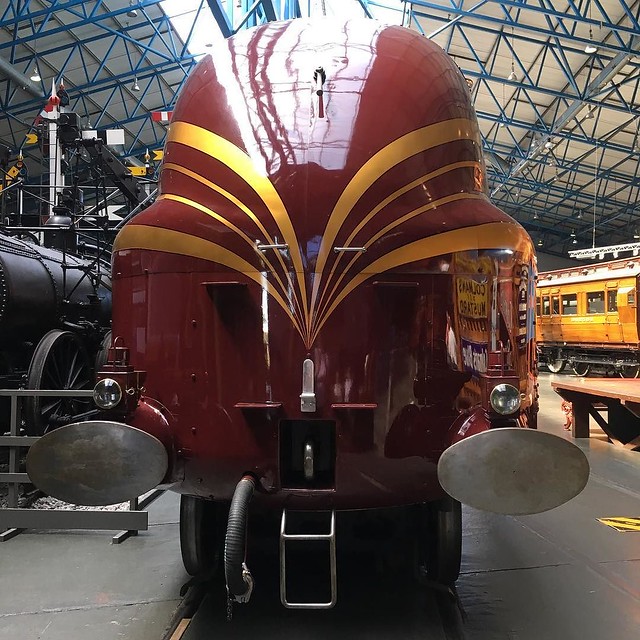 Yesterday, I surprised Steve with a trip to York so we could finally visit the Railway Museum. I was really surprised how big the place was, and we spent hours in there looking at everything. Personally, I was interested in the railway library called Search Engine (how appropriate).

Other than that, it’s been all about work. I am trying to get back into the mental headspace of writing. Really, I’m trying to convince myself that A. I have time to write each day and B. Even if I just write a little each day, it’s worth it. When I know I won’t be able to keep my mind focused on a 50,000 word 1st draft of something for 2 months (if I split the normal 1667 word count into two), I just keep thinking that it’s a failed effort.

However, I’ve been searching for inspiration and so far Gilbert’s Big Magic has helped. She has a whole section on not quitting your day job while you write because if you require your creativity to pay your bills, especially before you’ve written your Eat, Pray, Love masterpiece/best-seller. I took this to heart and thought, yeah, I can chill out about that because I need to work and I’m just going to have to fit writing and using my time wisely around the schedule that I have at the moment.

“But to yell at your creativity, saying, “You must earn money for me!” is sort of like yelling at a cat; it has no idea what you’re talking about, and all you’re doing is scaring it away, because you’re making really loud noises and your face looks weird when you do that.”

This book also talks about how you’re not going to succeed if you don’t accept the tough bits. I, personally, do not like that after I’ve written, I have to rewrite, edit, find critique partners, rewrite again, find beta reader, and then maybe, hopefully, possibly snag an agent who maybe, hopefully, luckily, possibly get me a publishing deal. Yes, I hate the not-so-fun parts. I admit that wholeheartedly. I hate the idea of trying to make an author platform and pitching my ideas to potential agents. I don’t really worry about the rejection because I sort of expect it, but knowing that I’ll be rejected and knowing how tough it is. (Though you see people getting books deals for stuff that I think, “that’s not that great” or “I could have written that” is equally as tormenting.)

But it has to be done, and right now I know it won’t be done soon. I’m incredibly impatient. When I want something, I want it now. If I have to do stuff for it, fine, but I want the results to be swift and rewarding. With creating works of literature, I know that’s just not how it goes. I have to be in it for the long haul, even if I think the finished product will never truly be done. (Another thing Gilbert talks about – perfectionism will keep your creativity from flowing.)

Other than that, I’ve been watching Orange is the New Black Season 5. I’ve been reading Dumplin‘ and The Hate U Give as I finish up Big Magic. My brother-in-law is getting married in July, so we’ll be attending the wedding in Liverpool. And since today is Father’s Day, I wished my Dad a very happy day. (And Steve too, even though we just have the cat and he pretty much runs our lives anyway.) And I’ve been playing The Sims 4: Parenthood, which is just an on-going thing that will never end for me and The Sims 4. We’ve been through too many years together to stop now.

For all of you doing JuNoWriMo, I salute you. Keep strong and write on! Find your inspiration and run with it.

Married to Steve. Mother of Jack. Librarian IT Assistant. Writer, teacher, blogger, podcaster, technological princess.
View all posts by Suzanne Schultz Pick →
This entry was posted in All About Me, Books, Television, Travel, Writing and tagged National Railway Museum, York. Bookmark the permalink.

1 Response to York and Everyday Things