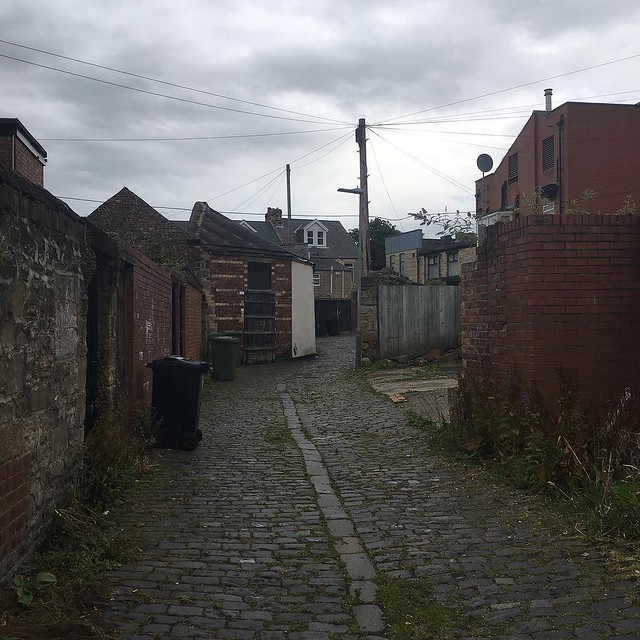 Well, it’s my day off so it’s blogging day.

Since my last post in June we’ve been doing more house remodeling than traveling. First of all, we live in a little two bedroom flat. It was built in the 80s so it’s not that old but it hasn’t been renovated for ages, so it needs a good make-over.
The first thing we did was get new blinds for the place. Steve stays home to work on Tuesdays, and with the sun blaring at us from the valley around 2PM on, it gets unbearably hot in the living room. (Insert my whining about why there is no air conditioning in the United Kingdom.) So I saw an ad in the paper that I happened to be looking at in the library one day and they had everything measured and cut within a few days of my initial call. Apparently, our flat has bigger windows than most homes, so I am pretty pleased that not only do we have an awesome view, but we have an awesome ability to look at it.
Now we have blackout blinds in each room, so I can come home from a long day of helping all the people with their IT queries, draw the blinds, grab a cider from the fridge and relax. It’s a priceless luxury, I tell you that much.
The next thing on our list is the bathroom. We’re getting the full suite redone so I actually have counter space (hooray!) instead of just dealing with a pedestal sink that can barely hold a toothbrush and a bottle of handwash. Now, the best part about our plumber coming to see us was that he immediately commented on how hot and humid our flat was. We have never had a vent working in our bathroom and there’s no window to let the steam out, so it gets really damp in our place. Of course, neither of us have been smart enough to put two and two together and figure out that what we need is a dehumidifier along with a vent for the bathroom.
Now we have the dehumidifier and the ventilation will be included in our new bathroom suite which will be installed when we get back from the Florida trip in October. (Another hooray!)
Our other revamping adventure includes a kitchen which I’m still skeptical about. We planned everything with IKEA a couple of weeks ago, and as awesome as the thing seems, it’s a big process for a little flat. I mean if we sell or rent the place out, it will increase the value, I guess. However, I will finally have a dishwasher again (I’ve been without for 6 and 1/2 years) plus a big refrigerator (ours is about 4 feet high and 2 feet wide – keeping a Thanksgiving turkey in it is non-negotiable). This will be tough to part with if we move from our little flat on the cul-de-sac with the awesome view.

Now, for the traveling bit — we’ve taken a small visit to Washington Old Hall because it is the home of George Washington’s ancestors. We’ve planned out our Florida trip and instead of taking a mini holiday to Nashville or Las Vegas while we’re in the USA, I made the executive decision for us to take a cruise over one of the weekends we didn’t have anything else planned.
I have never thought I wanted to go on a cruise but for the price and convenience, not to mention the fact that I don’t have to drive or be mindful of some itinerary for a few days, I chose a 3-day cruise to The Bahamas. If it’s too crowded or we hate it, fair enough, we don’t have to do it again. But, if my parents end up moving back to Ohio (something they’ve considered since 1989) then this may be our last chance to go on one. My friends in Florida have been on zillions and enjoy it, so I may as well give it a whirl.

Speaking of driving, I’ve been practicing my driving a little more now that it’s half term (school’s out!) so the roads are less hectic. I still take the bus on Tuesdays because I like using it as reading day. Long bus rides = getting reading done. So I’ve driven to the coast on the weekends, even went to a library by myself in the car. I used to absolutely love driving, now it just makes me nervous if I don’t know where I’m going.

Steve has just passed his Driving Theory Test though, so he’s well on his way to getting his license. I’m so excited for him because he’s wanted this for a very long time. Plus, it will be an immense help to have two drivers within the same household. When you want to take the bus you can, but if not, there’s always the car.

For the writing bit — I was complaining on Twitter that I had lost a bit of writing that I remembered doing not too long ago. It was part of a WIP that I’ve been playing around with for a couple of years now. It wasn’t monumental or anything, it just had the tone right for the relationship between the mother and the daughter. I use Evernote, Scrivener, OneNote, Novlr, and 750 Words to keep my writing available on the fly. I’ve had to hunt before for bits of writing, but I usually find it. This one has just vanished and I honestly don’t remember where or when I write the scene.

Anyway, my life has been about work and I think Steve is fed up with hearing about me whine about it. I’m in desperate need of a vacation so next month I will be in Florida with the biggest smile on my face. (More and more hoorays!)

Married to Steve. Mother of Jack. Librarian IT Assistant. Writer, teacher, blogger, podcaster, technological princess.
View all posts by Suzanne Schultz Pick →
This entry was posted in All About Me, Library, Travel, Writing and tagged driving, Florida, half term, holiday. Bookmark the permalink.