(do not) Return to sender 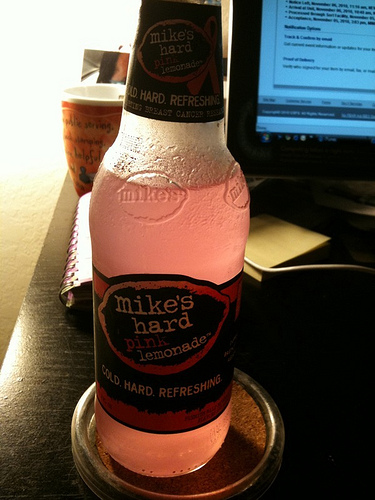 After going through a very stressful ordeal yesterday with the possibly lost, possibly undeliverable envelope, I needed some kind of refreshment.  Granted, I don’t drink that much, if at all, these days, so the idea of sipping a fake beer that is pink and lemony was a fine idea.  I slept through the night and woke up this morning at 6AM to the sounds of Monsters in the Morning on 104.1FM on my clock radio.  Ahh…back to normal.

So here’s the story of my envelope:  I sent our supporting documents via USPS on Friday.  It had to go to the British Consulate in NY and I wanted it there as quickly as possible.  I wasn’t sure if they took mail on weekends or not, but figured it couldn’t hurt to send something to be delivered on a Saturday.  So on Saturday, my tracking number listed that the mailman had “left notice” and “to pick up or schedule redelivery contact USPS.”  Hhmm…so they won’t just redeliver if it’s Express Mail?  This makes me start to worry.

I wrote USPS and said to have it redelivered.  Waited until Monday and the tracking info was the same.  So by 2PM I was starting to freak because the mail should have gotten there by 3PM (on Saturday they delivered by 11AM).  I called 1-800-ASK-USPS.  Here are the answers I got:  “We can’t give you any information, call this (never answered) phone number for the Post Office in NY.”  and “Oh, if you didn’t indicate not to have it delivered on Saturday or a holiday, it’ll just be sent back to you…”  What?

I called the British Consulate.  “Notice?  You can’t just tell the Post Office to have it resent?”  “Um, no, they list it as you getting a notice and needed to ask for redelivery.”  “Oh…hang on.”  I got put on hold then finally the very nice clerk told me that when the mailman comes on Saturday, the doormen tell them that no one is there to sign for it.  The envelope should be brought back again that Monday and I’d get an email when they had it.  It was almost close of business that day so it should turn up.  But if I don’t hear from then in a day or so it may be (“unfortunately”) sent back.  Great.

I emailed USPS.com, and phoned the local Post Office.  Both responses finally gave me the right answer:  They will try two attempts and wouldn’t send it back without letting the business know they had something for them and they’ll never just let an envelope sit around without trying to deliver.  They also said that the tracking info isn’t updated until the mailman/mailwoman gets back with their scanner and then it’s uploaded into the system.  So I could be waiting until 7PM before seeing that it was delivered.

This was the point where I bought the snacks and girl booze.  I was in a state.  I mean, this has been the most difficult, long, arduous process.  And I know they do it on purpose so we will be put off by it.  But when I can’t even know if an envelope is delivered, that’s just beyond my control and I didn’t know how else to keep fighting.  I’ve called tons of places over and over just to get what the Consulate wanted: 6 months of bank statements, letter from the school with specifics about my attendance, proof of direct deposits, proof of existing, proof of marriage, proof of relationship.  I mean, really.  I don’t think getting a mortgage is this hard.

By my second lemonade at about 6:30PM, sure enough, the USPS tracking information said that the envelope had been delivered – at 10AM.  Now I have to wait for the Consulate to email me but at least I know the silly envelope got delivered.  I still do have a slight fear that the envelope tore open and all our precious contents are strewn over NYC, but I’ll let that worry subside for now.  After sleeping a good night’s sleep, knowing my supporting documents are where they need to be, I rested easy.

For anyone who has to go through this, here’s some advice:  look at the list of info that the UK Border Agency website lists.  When you fill out the online application they just say “evidence of…”  The website for Settlement Visas is much, much more specific.  That’s where we had some back slide because we thought we had everything but found out, nope, they wanted more.  Get your fingerprints done as soon as you can and when you know you have everything you need.  If you get them done, then have to wait on something else (like I did from TWU) you end up having a 2-week long clock ticking and the risk of not being able to send your supporting documents in time really gets scary.  Also, have the mail send Express on a weekday.  The Consulate apparently does not accept mail in any form on Saturday.  Check your tracking number and talk to your local post office (not the 1-800-ASK-USPS) if you have questions.  If you need to phone the Consulate, keep pushing “5” and you’ll get a rep at the office.

Now there’s more waiting, but it’s a better kind of waiting.  I can relax more because my work is done.  There’s nothing else I can do.  That was the whole problem – it was just a constant struggle and fight to get things organized and sent off in time.  I want to be soon so each day we spent waiting on paperwork to get sent to us to send up to the Consulate was another day we weren’t together.  *sigh*

But for today I’m making stroganoff with meatballs instead of beef stew (Winn-Dixie didn’t have any lean stew meat yesterday).  Then I may take a trip to the library so I can finally get caught up on this reading.  This week I had Catherine, Called Birdy, The Wednesday Wars and now I’m trying to get through The Green Glass Sea.  I know it’s won awards and maybe for science buffs it would be interesting but, it’s just not going anywhere.  I was all excited when someone died because I thought finally something interesting would happen but, nope, just a brief bit about the President dying.  It’s just the same thing over and over.  Talks about the two kids and their parents working on “the gadget” during the war.  Interesting premise? Yes.  Interesting plot line? No.  As one Amazon reviewer said, “The plot was altogether uncaptivating. I found myself drifting away from the book and forced myself to read it.”  Yup, that sums it up nicely.