X is for X-Men 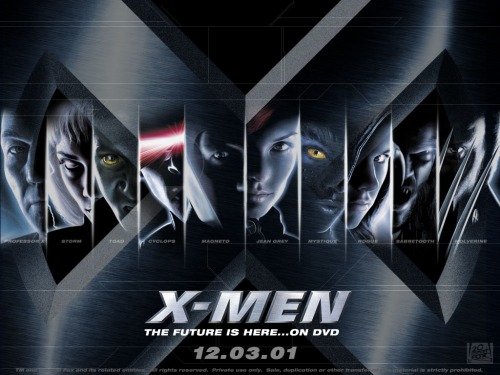 X-Men: This was an obvious choice since the only other X movie I could think of was Xanadu and I only know the song to that one. Anyway, can honestly say that I only know about these characters because of the films (this is true for any Marvel comic movies.) I was never into comic books as a kid so everything I know about Spiderman, Batman and The Hulk are from TV. I know basic stories and I appreciate the comic book stores themselves but I’m not way into them like the boys of The Big Bang Theory are or anything. With that said, I distinctly remember seeing the first the X-Men movie and only knowing who Wolverine was vaguely by name (and hair cut, of course.) Since it’s been forever since I’ve seen the first one and because I saw X-Men First Class on the plane to Florida last year so they’re starting to confuse me in events. The main thing that I liked about the whole theme of these films was that mutants can live in a society and be accepted for who they are somewhere. As with all the Marvel comics, the underdog is always the winner, despite all the painful things that have happened in their lives. That’s why I liked the first X-Men film so much because it showed Wolverine befriending Rogue and their first being helped by Professor X. I liked that Rogue was finally able to find a boyfriend that she wasn’t in danger of killing. I know I’ve seen all of these and I know the characters were awesome so even if comic book movies aren’t your thing, the first film is pretty good and worth seeing just to get a gist of the story.

2 Responses to X is for X-Men