I is for Indiana Jones and Interview with the Vampire 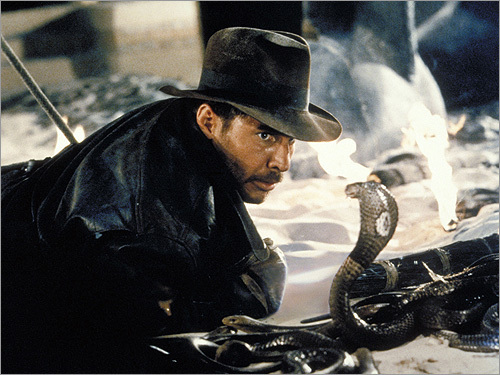 I’m confused as to what letter I should be on right now because I was supposed to skip Sundays which would mean my post from the 1st and the 8th and my “I” post would be for tomorrow. Oh well, everyone else is posting their Is for today so I will too. With the newest revelation that some people don’t know Titanic was a real event and not just a movie, I am compelled to keep on with my Culture Month theme.

With the I films, there were some monumental ones to choose from: Independence Day, Innerspace, IT (Which is one of my favourite movies and it really should be on this list but since there are so questionable shots, I didn’t put it as a top notch film. It was a mini series, after all.) Then, I had the task of not including Indiana Jones and the Last Crusade and opting for another.

Indiana Jones and the Raiders of the Lost Ark: Hands down, my favourite of all Indiana Jones films. Harrison Ford is legendary as a smart, funny, action character who knows how to captivate an audience. While all the Indy films are on cable, I will only guess that some people of a younger generation have only seen Indiana Jones and the Kingdom of Crystal Skull, a film that any respectable Indy fan has decided never happened. It’s awful and if audiences don’t understand the awesome origins of the relationship between Indy and Marion then they have missed out on a whole lot of better film making. You have Nazis, treasure hunting, large balls of death, monkeys, jungle natives and a lot of snakes. And, again, the movie is amazing because of how well Harrison Ford makes this character so dang cool. He’s not perfect and that’s great. You still want him to go into a large tomb of dead things to recover something those pesky Nazis want to take (one even gets his face melted off for being so awful.) If students have been to the Indiana Jones stunt show at Disney Hollywood Studios, they have to see this film to appreciate the action sequences that they’re re-creating.

Marion: You’re not the man I knew ten years ago.
Indiana: It’s not the years, honey, it’s the mileage.

Interview with the Vampire: Here’s the obvious reason for why I’ve chosen this film – Twilight. The year that I graduated high school, Interview came out. We were all amazed. We had seen the Dracula remake two years earlier but Interview was just phenomenal. It stuck to and played with the lore of the vampire, so it gave us new ideas about the old tenants of vampirism. It is fittingly beautiful, creepy and gruesome all at once and as Anne Rice says, these vampires are really evil. They are stuck with living forever as a killer and it’s not something to be envied. The acting was spectacular with Tom Cruise, Brad Pitt and Kirsten Dunst (yes, they did films like this less than 20 years ago so I’m sure a lot of younger fans haven’t seen this before.) The film does go overboard in convincing us what it means to be a vampire but it’s not so much that we hate the film. In fact, the way the story is executed is quite unique in Louie telling the interviewer, Christian Slater (where the heck has he been lately?) his life story. And wow, what a long story. The best story about the vampire is their epic history and that’s why this movie does so well at showing us the places Louie had been and how he became the monster he is in the present day. Seriously, since vampires are so popular these days, students should really watch one that upholds the basic vampire story. While Twilight is interesting and all, it’s not a well done film and it doesn’t show the way vampires have been thought of since, oh, forever. So this vampire fascination isn’t anything new.

Louis: That morning I was not yet a vampire, and I saw my last sunrise. I remember it completely, and yet I can’t recall any sunrise before it. I watched the whole magnificence of the dawn for the last time as if it were the first. And then I said farewell to sunlight, and set out to become what I became.